Breaking down the inequalities that limit access to radioligand therapy

I am Dr John Buscombe, the immediate Past President of the British Nuclear Medicine Society (BNMS) and a nuclear medicine physician with over 30 years’ experience in molecular radiotherapy, including radioligand therapy.

Over the past few years, I have become increasingly concerned about the difficulty people with cancer in the UK have experienced accessing the radioligand therapy they need. Initially, this was because of NHS funding issues; however this has been less of an issue over the past four years in England and Wales, though remains a concern in some devolved nations. To understand the situation more concretely, I worked with colleagues involved in the delivery of radioligand therapy, including clinical oncologists and medical physics experts, to survey the situation with radioligand therapy in the UK.

Though the survey looked at all forms of molecular radiotherapy, there was a section devoted to the provision of lutetium-177 dotatate. This is a form of radioligand therapy used in a variety of relatively rare cancers known as neuroendocrine neoplasms (NENs). This treatment, also called peptide receptor radionuclide radiotherapy (PRRT), was approved by the National Institute for Health and Care Excellence, and funded by NHS England.

What did we find?

In theory, everyone in England should have equal access to this treatment. However, we found a disturbing variation in the delivery of radioligand therapy for NENs across not just England, but the whole UK. Below is a map showing the three devolved nations (Wales, Scotland and Northern Ireland) and the regions of England. What you can see using the map’s traffic light system is that there is only good provision of this this form of radioligand therapy in the north and south west of England, Wales and London. 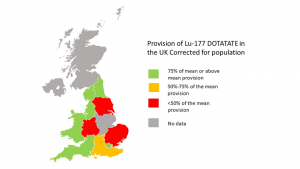 As we can see, assuming that no data means limited/sub-optimal access, less than half of the UK has reasonable access to this form of radioligand therapy. The reasons for this varied, but included a lack of trained staff and facilities. If the UK government is serious about its ‘levelling up‘ agenda, these inequalities in the provision of radioligand therapy must be addressed as a matter of priority.

Opening radioligand therapy up to everyone who needs it

It has been argued that  people with cancer could travel to another region for treatment, but this is not an appropriate solution. Firstly it would overburden areas of the UK that have made the effort to provide a good radioligand therapy service. Secondly, some people may be too sick, too frail or in too much pain to undertake long journeys.

As new radioligand therapies may become available in the future to treat more common cancers, it is essential these inequalities in access are addressed now otherwise this innovative and potentially important treatment will only be able to reach a fraction of the people who need it.

We must stop saying “we don’t do that here”, which has allowed this situation to develop, and call upon NHS England and the devolved nations to ensure that every person who could benefit from radioligand therapy can receive this treatment close to home – wherever in the UK they live. 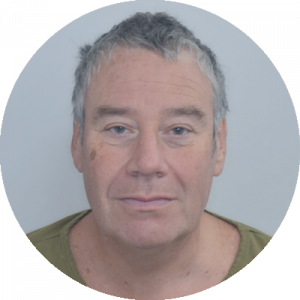 You can find out more about which cookies we are using or switch them off in settings.

This website uses cookies so that we can provide you with the best user experience possible. Cookie information is stored in your browser and performs functions such as recognising you when you return to our website and helping our team to understand which sections of the website you find most interesting and useful.

These cookies are strictly necessary to provide you with services available through our website and to use some of its features. These must be enabled at all times, so that we can save your preferences.

This website uses Google Analytics to collect anonymous information such as the number of visitors to the site, and the most popular pages.

Please enable Essential Cookies first so that we can save your preferences!